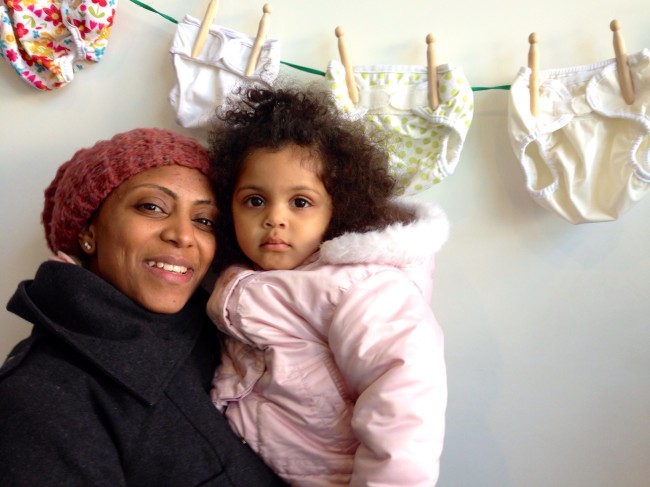 Families in Hackney are being challenged to hunt down as many washing lines adorned with cloth nappies as possible in a bid to celebrate Real Nappy Week 2014 (28th April – 4th May) and raise awareness about the alternatives to disposables.

The nappy washing lines have been hung in “top secret” family-friendly locations around the borough for the duration of Real Nappy Week. Families are encouraged to take their photo in front of the nappies and either Facebook (www.facebook.com/hackneyrealnappynetwork), tweet (http://twitter.com/hackneynappynet) or email (madlyn@hackneyrealnappy.net) it to the Hackney Real Nappy Network in order to be entered into a prize draw at the end of the week.

Only one entry per person per washing line is permitted so the more washing lines – of which there are over 20 – a family finds, the more entries they will gain in the prize draw, which will take place at the end of Real Nappy Week.

Participants have the chance to win a bumper goody bag, which features a ‘Lady Muck of Whitstable’ jewellery set, Hackney Picturehouse cinema tickets, a meal for two at the Russet Café, a Bumkins ‘Cat in the Hat’ nappy and Lorax book from Born, Stoke Newington, and a children’s picture book kindly donated by Victoria Park Books. The first 25 people to enter the competition will also win a GreenPomelo wet bag.

“The washing lines are a fun way to mark Real Nappy Week 2014, as well as get local families interested in making the switch away from disposables. It will be clear for all to see that cloth nappies are bright, colourful and look great, but it’s worth noting that they can also save families considerable amounts of money and are far more environmentally friendly than disposables.

“We’ve got some fantastic prizes up for grabs so I’m looking forward to seeing people’s snaps. Make sure you like us on Facebook and follow us on Twitter as a few clues to the washing lines’ whereabouts may be given away!”

Around six percent of waste in Hackney comes from disposable nappies. This is equivalent to the weight of nearly 456 double decker buses each year. Reusable nappies can make an important contribution to waste reduction in the borough and residents are entitled to a £54 voucher per child to spend on real nappies.