There has been talk on the forums recently about the new owners of The Windsor Castle on Lower Clapton Road. The pub has been closed in recent times after some trouble, but has recently been taken over by a new venture. I caught up with it’s new landlords Martin Wade Thomas and Ross Allmark to find out more. 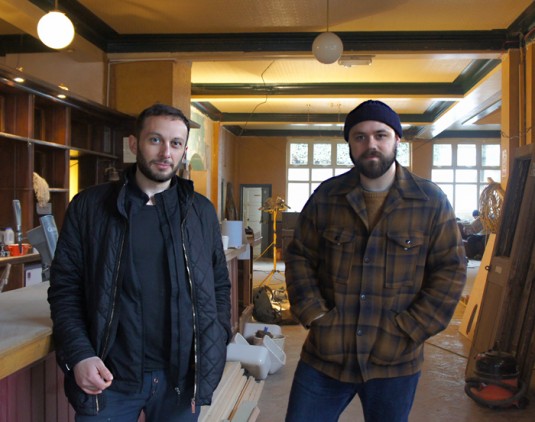 Martin Wade Thomas: As well as me and Ross there’s Cinz and Anthony from Birthdays and The Old Blue Last, and Neil Gregory from The Spurstowe Arms and The Royal Oak on Columbia Road. There’s a lot of talk about this being a Vice project but that actually isn’t the case; we’ve done a lot of work with the guys from Vice over the years and continue to do so with the The Old Blue Last but as with Birthdays this is an independent venture.

What are your plans with the pub?

MWT: At the heart of it we want The Windsor Castle to be really great local pub, which will mean first and foremost ensuring that it has a friendly and inclusive atmosphere. We’re in the process of installing a brand new kitchen, although we can’t say what the food offering is just yet.

Ross Allmark: With The Windsor we want to keep it simple; create a friendly, authentic pub with a good quality food and drink offering and then let it evolve from there. In the end it’s the people that frequent an establishment that really make it.

There are a lot of local breweries, are you planning to stock their beers?

MWT: I think with the quality of what’s on offer we’d be stupid not to. As with the other sites we run we’ll be offering locally brewed beers from breweries such as London Fields, Tap East, Kernel, Meantime and Trumans, with which The Old Blue Last especially has a historic relationship.

Are you keeping the pub’s name?

MWT: The subject of re-naming did come up, but in the end it just felt wrong; there’s been a pub called The Windsor Castle on the site since the 1820s and given that there are so few of the original pub names in the area we really didn’t want to change it.

The Windsor Castle circa 1880

There are rumours that you were looking locally in the past, what drew you to Clapton?

MWT: I’ve actually been looking at sites in Clapton on and off for years – I looked quite seriously at taking on The Lord Cecil a few years ago but at the time the amount of renovation works required meant it was well beyond my means. Sadly given the current state of that site I get the feeling it might be lost to us now, which is a huge shame considering it’s potential. We started looking again about two years ago but despite getting quite a long way down the line with one site in particular it didn’t quite pan out, so we focussed our energies on setting up Birthdays over in Dalston. Then late last year the guys from The Windsor got in touch and this project was born.

RA: I live just round the corner on Evering Road so I’ve ended up spending quite a lot of time in the area, especially down at the Pembury which is a great boozer. Still it felt like Clapton was a little under-serviced compared to areas like Stoke Newington and I think we can definitely offer something different to the other operators in the neighbourhood.

Do you plan on getting involved with the local community?

MWT: I think if you’re running a pub you can’t help but get involved with the local community, at least if you’re doing it right. We’ll be looking to employ staff who are as local as possible and we’re hoping this piece will be help open up dialogue between us and the wider community in Lower Clapton.

RA: I think to some extent we’d probably consider ourselves part of the community anyway, we both live locally and we’re certainly no strangers to the other bars in the area. That said I think engaging with the wider community is really important… Even on a purely commercial level we want to make sure we get our offering right.

What do you love about Hackney?

MWT: I’ve been living here for fifteen years, I can’t really imagine living anywhere else to be honest.

RA: Yeah, there really isn’t anywhere else in London like it is there? It just has a totally unique character to it, partly I think because of the huge diversity of social and ethnic groups that have passed through over the years, each one leaving there mark on the borough. There’s just no way that kind of thing can be replicated.

When do you plan to open?

MWT: I don’t want to jinx it so let’s just say spring for now.