Hackney and Leyton Sunday Football League was formed in 1947 after the Second World War had ended. Football was a popular amateur sport and the Sunday League was created to mimic the Leagues of the professional game.  The Hackney and Leyton League became synonymous with Hackney Marshes where there were over a hundred football pitches. Other sites used were Mabley Green and Millfields.  The pitches were laid out side by side and top to tail with very little green space wasted. The changing rooms and facilities were extremely basic, cattle troughs with cold water were provided for washing, but none of this ever deterred the hundreds of footballers turning out each week. Most of these old changing facilities have recently been demolished. The League also ran cup competitions and cup finals would sometimes be played in more salubrious stadiums such as The Hare and Hounds (Leyton FC) in Lea Bridge Road.

The Hackney & Leyton Sunday Football League is still running successfully today with 5 Divisions and is said to be the most prominent Sunday football league in the UK. Hackney Marshes has a brand new changing facility with a cafè and balcony overlooking the Marshes 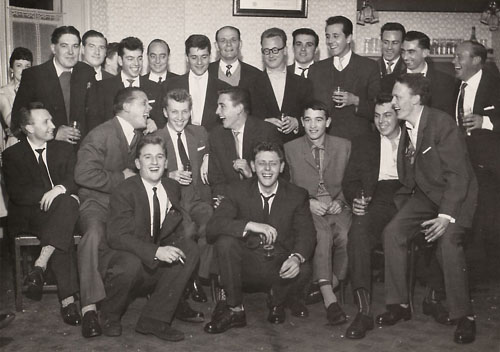 In the 60’s and 70’s my Grandfather as Secretary/Manager ran a team in the Hackney & Leyton Sunday Football League called ‘Arcola’ with some success. The team name comes from Arcola Street E8 where he lived and the players were made up of family members and friends. Arcola also had a second youth team for a while before they were later merged. I remember spending many Sunday mornings watching Arcola play and proudly carrying a brown leather football and a pail of water containing the ‘magic’ sponge from the changing rooms out to the side of the pitch; they were so heavy I could barely lift them! My strength to lift them was probably gained from the Dextrosol energy tablets which my Granddad fed me, these along with sliced oranges were eaten by the players during half time.

Your browser does not support iframes.

A nice post from @traxcitement on the Hackney & Leyton Sunday Football League over on the blog: http://www.yeahhackney.com/2011/07/the-hackney-leyton-sunday-football-league/