The Church of the Good Shepherd, Clapton 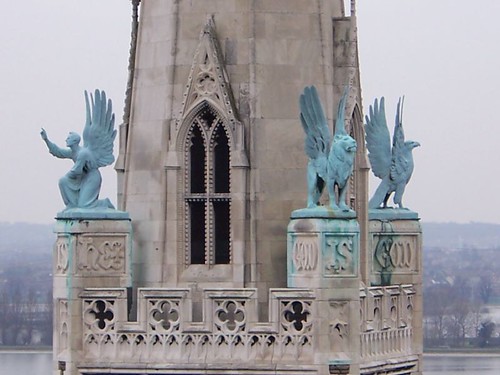 Photo by sarflondonduncThis is a pretty unusual church just off Clapton Common this is what it ways on wikipedia:The Church of the Good Shepherd was used as a place of worship by the Ancient Catholic Church and now is used by the Georgian Orthodox Church. However the church was originally built by the Agapemonite cult in 1892 as the Church of the Ark of the Covenant.The Agapemonites who held decidedly unconventional views on marriage and the role of women relocated to Upper Clapton from their spiritual community in Spaxton Somerset and had clearly prospered by this time. Although it is fairly conventional in floor plan the outside of the church is a riot of statuary and symbolism. The main doorways sport large carvings of angels and the four evangelists symbolised by a man an eagle a bull and a lion. The same four figures cast in bronze look out over the four quarters of the Earth from the base of the steeple. The two flanking weather vanes show a certain symbolic debt to William Blake’s Jerusalem depicting as they do a fiery chariot and a sheaf of arrows (presumably of desire) while the main steeple is clearly surmounted by a spear. The stained glass windows betray the unconventional nature of the sect as they illustrate the ‘true station of womankind’.The church was completed in 1895 by J. Morris in a Gothic style; and was designated a Grade II listed building on 12 September 1969 — for its “curiosity value”.The cult had always been surrounded by scandal during its sojourn in Somerset and after the move to Clapton this degenerated into sheer farce. The original leader Henry James Prince who claimed to be immortal died in 1899 and was succeeded by the charming but philandering John Hugh Smyth-Pigott who wasted no time before declaring himself as The Messiah. Challenged by a jeering mob to prove his godhood by walking across Clapton Pond Smyth-Pigott declined and retired to Somerset where he was said to enjoy the favours of as many as seven ‘spiritual brides’ a week. Smyth-Pigott who of course also claimed immortality died in 1927 after which the cult went into decline. The Clapton church had already been abandoned by the cult was acquired by the Ancient Catholic Church in 1956 and the Georgian Orthodox Church in 2005.-o00o-Not sure they mean Clapton Pond or the pond on Clapton Common close to the church”