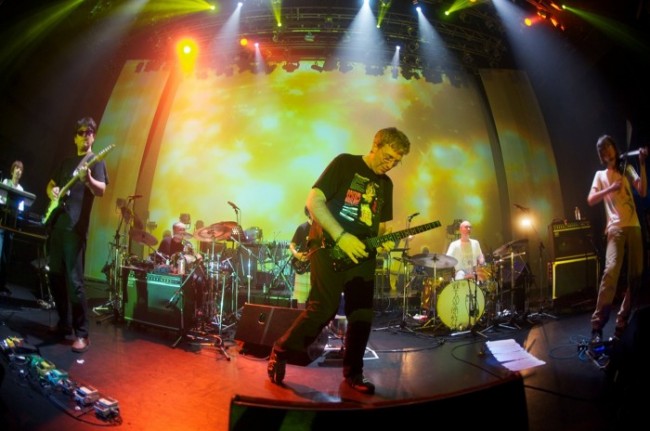 Masterminded by System 7’s Steve Hillage, who was recently given the ‘The Visionary Award’ at the Progressive Music Awards 2013, the ‘Phoenix Rising’ live Tour shows combines System 7 and Rovo playing together, utilising techno beats as the rhythmic basic and live drums, seamlessly morphing into each other. The Phoenix Rising concerts deliver one of the most sophisticated blends of electronic beats and live playing ever produced, made possible by the skilled musicianship of eight players. With individual Rovo and System 7 sets, and their joint Phoenix Rising Live show, Hillage’s masterful electric guitar style duets with the electric violin of Rovi’s Yuji Katsui are definitely something to catch.

System 7 were recently Special Guests on The Orb 25th Anniversary Shows, and are are Steve Hillage and Miquette Giraudy. They released their first System 7 record in August 1990 on Virgin Records, and since then they have released 11 albums and a string of singles with some classic remixes including mixes from Richie Hawtin ‘Alphawave’, Derrick May, Dubfire, Carl Craig and A Guy Called Gerald. One of the few techno groups to feature the electric guitar (with the sound often heavily processed), and also a female synthesiser player, System 7 continue to tour worldwide headlining some of dance music’s biggest festivals including Glastonbury, Glade, Sonica and Ozora and were recent Guests on The Orb’s 25th Anniversary UK tour.
System 7 who have spent the last 25 years immersed in the alternative music and festival scene both here and abroad, and their family tree of connections include the Glastonbury Festival, which they helped launch the Dance Stage back in mid 90’s, Glade, Spiral Tribe, + many more. System 7 projects have been marked by a series of high powered collaborations, working with Detroit luminaries Derrick May and Carl Craig, Laurent Garnier, The Orb, A Guy Called Gerald, Jam El Mar, Son Kite among others. System 7’s club singles have had outstanding remixes from the likes of Plastikman, James Holden, Dubfire and Liquid Soul.