Thanks to the power of twitter, Alex and I were fortunate enough to get some tickets to Shacklewell Nights opening night.

The night/place/event/secret-supper-club/pop-up-restaurant/hidden-dining-experience is essentially a great use of an empty space to get lots of people together and cook for them. It’s a project from Claire Roberson of Green Onions Supper Club and Jonathan Woolway of St Johns Restaurant. Having missed out on finding out about Green Onions and the uncertainty if it will continue since Claire had to move, I was pretty excited to be part of this new venture.

The space was on top of an old warehouse that is used as studios in Shacklewell Lane and was a laid out as about 8 tables to fit around 60 people. We turned up to a room full of people, some who knew the organisers, some couples on their own and some in groups. Tables fit between 6 – 8 so it was very much a social experience, completely by chance we happened to be sitting at a table with a former colleague of mine Eliot and his girlfriend Kath. We were also joined by a Doctor called Chloe and a teacher called Antonia all of who were great fun.

The meal started with a glass of wine when we got there and the menu continued as follows:

The food was pretty amazing (I can vouch for the veggie menu and Alex for the meat eaters), but by far my favourite course was the raspberry sorbet and amazing vodka from the Sacred microbrewery in Highgate (yes I have simple tastes)

The meal cost £35 per head and it operates a BYO policy, I’m told the next event will be towards the end of September, if you can book tickets then make sure you do. 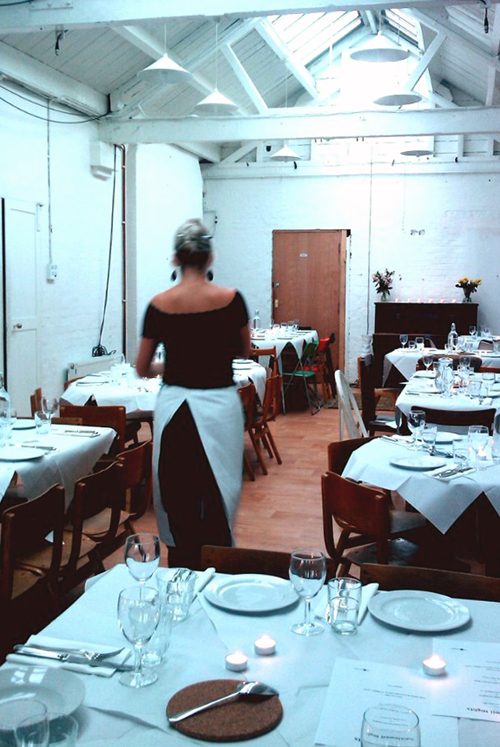