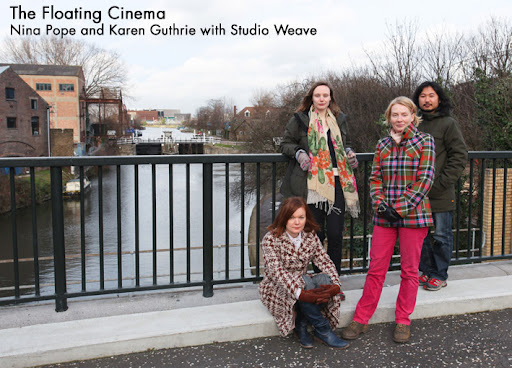 From: http://www.upprojects.com/portavilion/projectsPORTAVILION 2011: The Floating Cinema3 June 2011 – 1 September 2011The Floating Cinema by Studio Weave and Somewhere for PORTAVILION 2011an up projects production for the waterways of East London.UP Projects’ Portavilion project continues in 2011 this time on the waterways of East London in partnership with the Olympic Delivery Authority and Create 11.The Floating Cinema will be designed by Hackney based architects Studio Weave working with artists Nina Pope and Karen Guthrie (known collectively as Somewhere) and will navigate the waterways of the five Olympic host boroughs during the summer 2011. This extraordinary floating structure will accommodate intimate on-board film screenings larger outdoor film events and provide a base for film related activities led by Pope and Guthrie.Somewhere produce ambitious innovative and challenging projects spanning film the web installation live events and public art. They will be spending time with the many communities connected to the canals to develop a project aboard The Floating Cinema that seeks to gauge a ‘human blueprint’ of the waterways and connections to the Olympic Park and Games. Studio Weave is an energetic young design practice working on art and architecture commissions across the country. Their designs play into and explore the quirky and eccentric characteristics that make places distinctive and they will bring this approach to the design of The Floating Cinema.This commission is part of Portavilion 2011 and builds on the success of Portavilion 2008 and 2010; a series of temporary pavilions for London’s parks and public spaces that have brought high quality sculptures and cultural events to a broad public audience. For 2011 the project will focus on waterways that connect the boroughs of Tower Hamlets Newham Waltham Forest Hackney and Greenwich with the new Olympic Park.Portavilion 2011 will form an important strand of the cultural participation programme in the lead up to the 2012 Olympic and Paralympic Games. It will form part of the Create 11 summer festival is commissioned by The Olympic Delivery Authority and funded by Arts Council England.”