Reposted with kind permission from the wonderful London Review of Breakfasts

I had never really spent any time in Hackney Wick, at least not deliberately. Based on its reputation I was imagining an outland of free expression, a place where creativity could run untethered and naked. Monkeys playing accordions on the streets, men in berets judging my scale with gnawed thumbs. But deep down I knew I’d find a handful of timber depots, plus the occasional person in a sleeveless flannel top.

When we finally glimpsed our target, alarm bells rang – those internal alerts we each install when we realise hipsters don’t run or frequent good food businesses. 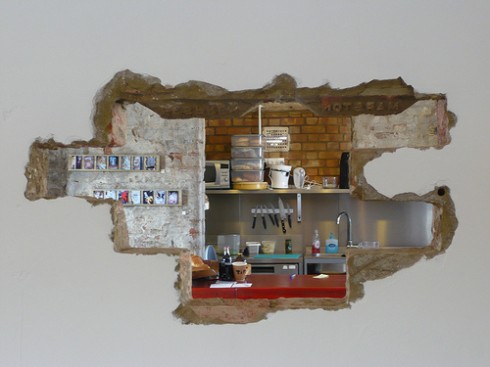 For here they were both sides of the counter: girls with short bleached hair and billowing ethnic-print trousers; men with long hair, longer beards, NHS glasses, orange gingham shirts. A waiter’s cartoon-bear T-shirt, tucked into his tiny polyester shorts. Another’s braces hand-made from an unravelled length of blue packaging rope. Shouty folk music on the speakers and psychedelic art on the walls. Guardian newspapers everywhere. Hardly were those sights met when I closed my eyes and was troubled by a vast image: a stoned chef and a passive aggressive owner, pissing away a trust fund. In the background flashed mood-words such as ‘screenplay’, ‘site-specific theatre’ and ‘guerrilla gardening’. I braced myself for a bad breakfast.

Then my Big Breakfast (£8) arrived and it was really, really good. As good as the breakfast in Bistrotheque or Caravan, perhaps better for the genuine shock. The yolk of my fried egg? As golden as the voice of St Gregory of Nazianzus, mingling harmoniously with the baritone carbs – the jolly potato cake and ebullient buttered Vogel toast. Bacon and sausages were fit for a duke, and the beans, oh my, they were a rarity – homemade yet worth the effort: butter beans in a salacious sauce of tomato, rosemary, garlic and lemon. A large, succulent mushroom, a ramekin of tangy inhouse relish and good coffee completed the picture.

As if by magic a canal bridge made itself visible, enabling us to leave without retracing our steps. The Olympic Stadium loomed over us as if it wanted to say – there, now you know the truth about 2012. It’s whatever’s important to you. Follow your dream, my dear Malcolm. Yeah whatevs, I replied.

From: London Review of Breakfasts 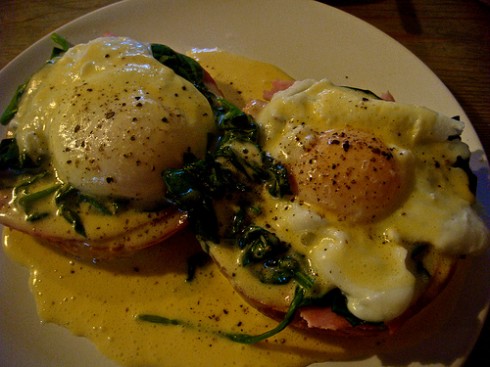