Under the collaborative ‘Fugitive Images’ with Lasse Johansson and Tristan Fennell, local artist Andrea Luka Zimmerman came up with a innovative idea to transform a 1930’s council block that was being boarded up with ugly orange boards through the use of public art. What resulted was one of Hackney’s most photographed and talked about housing estates. Here we chat to Andrea about her past, present and future work in Hackney. 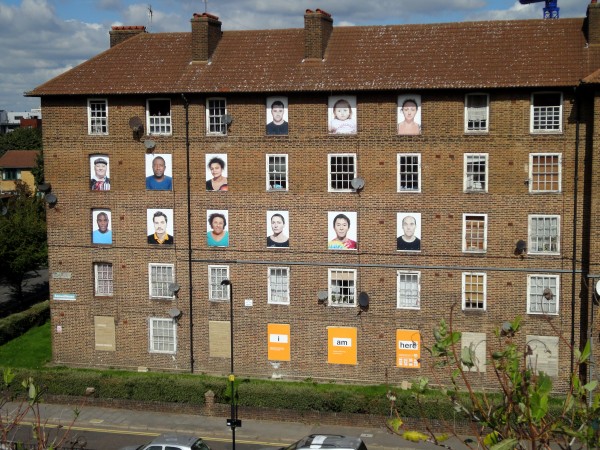 Where and how long have you lived in Hackney?

I have lived in Hackney for the past 20 years. Started in Hoxton in the early 1990’s, then Haggerston.

Tell us why you became an artist and what medium of art you specialise in?

I became an artist by chance, and when I came to the UK. Where I grew up no one became an artist or filmmaker, go to university or any such thing. We became hairdressers, worked as secretaries or in local shops. When I moved to London I had this dream that I wanted to become a filmmaker, but had no idea as to how, or even if. I suffered a lot from depression when I was younger. Someone at a bus stop told me about a course run in Tower Hamlets, an access course in video and photography. I went there for one year, got totally absorbed, did all the other optional courses such as film studies, photography and 16mm, and from then on saw the possibility to become an artist. I went to Central St Martins Fine Art Film Course (no longer exists), and it was the best thing I could have done then.

How did the critically acclaimed ‘I  Am Here’ project come about and how did you get Hackney Council to approve it?

Hackney Council no longer owned the building (Samuel House) then. It was Hackney Council who put up the orange boards over the void units that the residents hated so much. It is important to remember the building is still lived in today, there are kids, and quite a lot of elderly people, and we won’t be moved out until the end of 2012. Once the orange boards came up people thought the building was condemned, which brought about its own problems: fly tipping, people breaking into empty flats taking out pipes (flooding the other flats in the process) etc. We therefore had the residents on our side when we wanted to change the orange boards with photographs of the current and past residents of the estate (we gathered 98% support in signatures from the other residents).

You have been filming and interviewing current and former residents of the Haggerston and Kingsland West Estates, what will you do with the film and will you continue the documentation through to include the new estate?

We are still working on documenting the estate. We are planning to continue to document the new estate, and include this in our film. We are starting to fund-raise for the film in order to extend the scope of it. Thus far we have done this on our own for research purposes.

Your book ‘Estate’ has just been published, what is it about?

During its lifetime Haggerston and Kingsland estate has undergone a remarkable journey from being locally known as prestige block to becoming a so-called sink estate and christened the heroin capital of Europe by the local vernacular. A troubled estate to be replaced with state-of-the-art social housing combo luxury development – is pretty straightforward, no? But personally we feel conflicted. We felt perhaps something important was about to be lost. We began the project because we wanted to try to understand better the significance of this moment of change. the book differs from the ‘I am here’ in the way that it is not site specific to the estate, but merely uses it as a starting point for a more general debate on public housing. the ambition with ‘Estate’ is to bring together alternative ways of approaching and thinking through the subject of estates and public housing beyond the usual stereotypes of social disorder, violence, drugs and benefit dependency. The book consists of one visual essay and four written ones. We contributed with the visual essay and one written, Paul Hallam Victor Buchilli and Christina Cerulli provided one each. 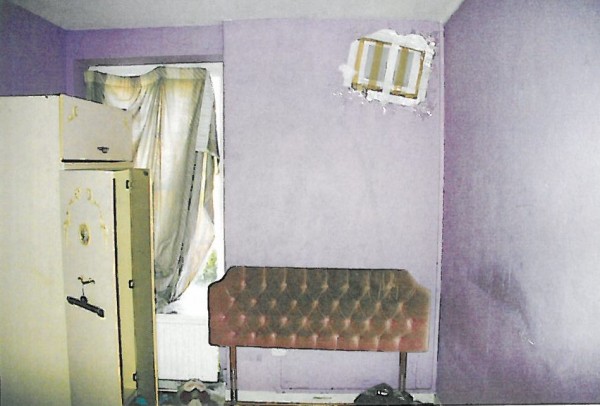 Bed board and taped-up air vent with several layers of tape stuck on to hold the closure in place – Photograph  copyright Fugitive Images.

Tell us about your involvement with the artist studio/gallery Studio 75 and what type of art can be seen there?

Four residents are involved with Studio 75. It is a disused studio flat on the estate. each of the people programme different events. My personal involvement is programming ‘Flat screens’, a 10 monthly series of film screenings. Building on the Maysles Harlem Cinema this project aims to build a space for social exchange amongst this community at Haggerston and Kingsland estate. Alongside the screenings the space will offer a forum for the discussion of questions of social, economic and community concerns and explore areas of knowledge. The initial programmes are selected by myself with the aim to see the monthly screenings grow and change as and when other members of the community become more involved. The final outcome will hopefully to have a solid foundation for a yearly film festival run from the new community centre, which will have an in-built projection wall and triple height hall. 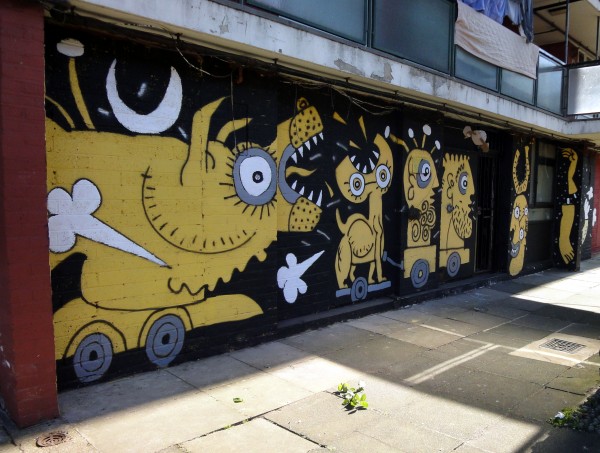 What other projects are you currently involved in and what do you have in the pipeline?

We are beginning to fund-raise for our film project on the estate; we are developing it into a feature length film.

As an artist what is special about Hackney?

Uhhh! it becomes harder to tell after such a long time. In the past it was a vibrant place that was cheap with affordable studios. I can no longer afford a studio here now, but I still love it here!

For more on the ‘I am Here’ project see here http://www.iamhere.org.uk/