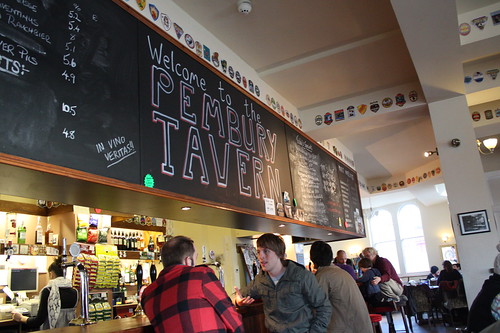 The Pembury Tavern is located on Amhurst Road, a short walk away from Hackney Downs and Hackney Central, dominating the junction of Amhurst Road, Dalston Lane and Pembury Road. Featuring sixteen handpumps, the Pembury has the largest selection of real ales in Hackney that I’ve yet seen, and has been featured in recent editions of The Good Beer Guide published by the Campaign for Real Ale.  The ales on offer change frequently throughout the months, apart from Milton Brewery selections such as Nero, Sparta and Minotaur which have been Pembury staples.

The Pembury is slightly brighter than most pubs, featuring a main room filled with wooden tables that horseshoe around a main bar that doles out drinks as well as food.  You can check out the menu on the chalk board above the bar for food and drinks.  Recently, the Pembury Tavern has changed up its food menuto reflect more Italian tastes, getting rid of chips and the somewhat odd-sounding halloumi jalfrezi in favour of pizzas and pasta.  I personally preferred my ortolana pizza ordered last week to the vegetarian moussaka ordered in April of this year.  The most basic pizza, the margherita, starts at £5.50.  Cards are accepted as well as cash for orders and depending on what you order, a pint price can vary, usually somewhere around £3.00, more or less.  A real cider is also usually available, often with an ABV above 6%. 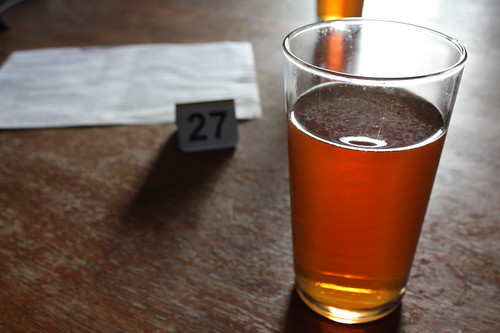 Should you go to the Pembury Tavern, you may notice a few locals with laptops taking advantage of the free wifi in the pub.  There are also various games available to play, such as Scrabble and dominoes, along with a bar billiards table.  The pub will also be hosting a beer festival beginning on the 17th of November, so if you’re looking to expand your beer palette, that would be a wonderful time to do so.  In the meantime, pop into the Pembury to see what ales and wines are available, perhaps attend the next Twee8 meeting of Hackney Twitter users, and see how you like their new Mediterranean menu.

Last orders are generally at 11 pm.