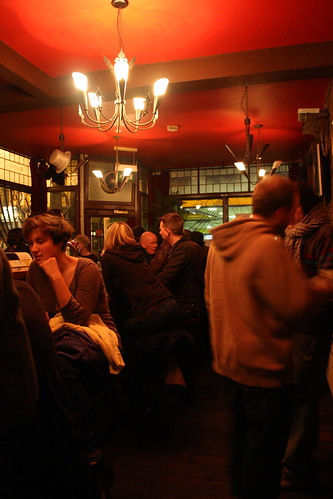 Biddle Bros/Brothers is a cosy local Clapton boozer that plays host to a varied selection of live music for a varied clientele.  You might like what’s on that night or you might not, but the patrons of Biddles prove to be just as entertaining at times as the live bands and performers themselves.  The crowd is, like Hackney, fairly diverse, with your young trendsetters mixed among other locals of various vintages and vogues.

The pub is made up of three rooms, with the third room being downstairs leading to the toilets with a communal sink, which can function as a bit of a social spot while sudsing up your hands.  The other two rooms are on the ground floor, with the bar extending into the second room for drink service.  The stage is in the second room, but the music can generally be heard throughout the pub if it’s a live performance.

Biddle Bros is cash-only, so be sure to have some bills in your wallet or some pounds in your change purse, especially since the nearest cash machine will charge you to withdraw money (you’ll need to walk to Mare Street for the nearest free cash point).  As for the cost of drinks, from a visit in February 2010, a pint of Staroprammen was £3.20.  There’s no food prepared at Biddle Bros, but if the Italian restaurant next-door is open, you may be able to order food from there and have it brought to you at the pub.  Otherwise, requisite pub snacks such as crisps and peanuts are present to satiate your stomach enough for that next round.

When it’s full, it can be quite a squeeze, as Biddle Bros is built to be more long than wide.  Get in early and stake your claim on a bar stool, at a table or at a spot near the stage if you fancy the jazz or the folksy-blues being played that night.