The name Len Silver and Hackney Speedway are synonymous. Len an East End boy began riding cycle speedway before moving up to the 500cc motorcycle variety. He became promoter at Hackney whilst he was still racing , however in 1964 he suffered a career ending injury which left him to  concentrate fully on his promoting duties. And what a promoter he became, working tirelessly through the week preparing the track, driving around the East End in a van telling everyone to Make it a date Friday at Eight! via an illegal loudspeaker and fly posting large colourful advertisements claiming “Speedway Roars into Hackney Stadium”. On Friday race nights inside the stadium from the centre green Len would be at his most enthusiastic in the 5 minute gaps between races he would encourage the supporters to get behind the Hackney Hawks. Using a microphone over the P.A. system he would start war cries “2-4-6-8 who do  we appreciate H-A-C-K-N-E-Y Hackney!” shouting at the top of his voice and waving his arms around furiously. Then during races when his riders passed an opponent he would jump up and down in a very excited and animated fashion this is how he became known as Leapin’ Len. 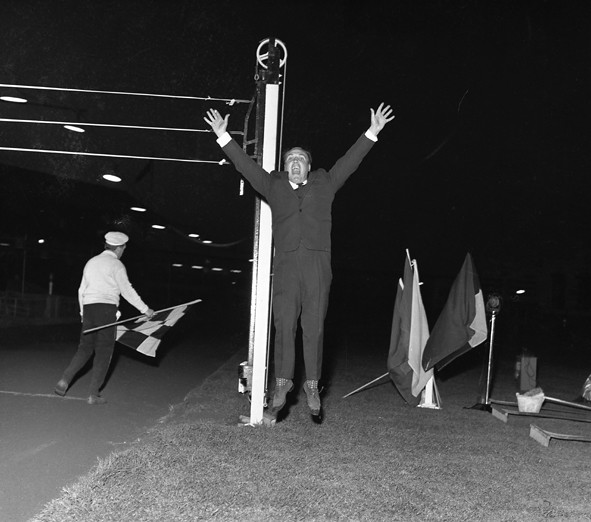 Leapin’ Len gets them going at the Wick (Photo copyright Retro Speedway) Len Silver was a brilliant showman and promoter at Hackney Speedway for 20 years in which time he also managed the England Speedway team to 3 World Cup successes. He is perhaps more famous than any of the great riders who raced for the Hackney Speedway team. As he approaches his 80th  birthday Leapin’ Len is still promoting Speedway at Rye House although in a much more subdued fashion these days. Len Silver – As Luck Would Have It 2009 by Retro SpeedwayISBN-10: 0955934036 http://www.retro-speedway.com/page.php?60“