You may have heard of GoodGym a not for profit company based in London, we mentioned it’s expansion into Hackney a while ago on the site. They are a great organisation that add additional benefit and motivation to getting fit, but adding a community aspect to it.

I first heard about GoodGym when I saw founder, Ivo Gormley talk at Tedx Hackney in 2012 (you can watch that talk here), I was really interested in the idea that instead of using electricity to power treadmills to help you burn energy, you use the energy that you burn by doing something good.

They recently sent me this story that I wanted to share: 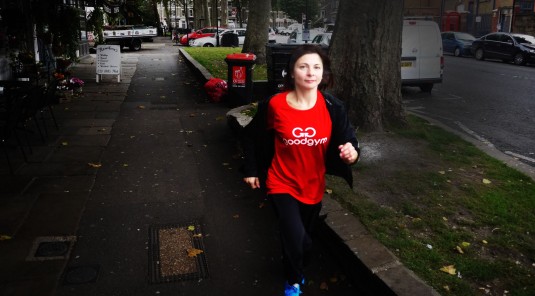 Last night Hackney mother of two Nicoletta ran to see Stephen, an isolated older resident of the borough. Like hundreds of others in Hackney she’s part of GoodGym, a growing movement of people who believe that they can do better than simply going to the gym. Instead of just running on a treadmill, they run to visit isolated older people and to support projects in their community.

For Nicoletta she wanted to find a different way to exercise:

“I’ve been running for a bit… I thought well, I want to keep running and improve but not get stressed, so it’s useful if you combine it with others… the ethics is spot on… It was combined effect of running and volunteering. You don’t just volunteer; you get something back in terms of motivation to exercise.”

Stephen, like many older people, doesn’t have friends and family close by. This is a growing problem in the UK, over half of people over 75 live alone, and between 6% and 13% of people over 65 say they feel always or very lonely .

Stephen has now become Nicoletta’s coach, encouraging her to keep running and sharing his wisdom.

“It’s an encouragement for the one who’s being helped to get out of bed and get tidy and its’ good for the runner to be encouraged to get out in the rain.”

GoodGym Hackney is run by personal trainer Ade Aboaba who makes sure that everyone gets the most out of it.  As a result of her visits to Stephen, Nicoletta is getting fitter and faster,  she said:

“This time I did it quickly and shorter… I notice my stamina is increasing.”

“Nicoletta is getting faster and faster. It’s great having her involved.  She’s a massive help to Stephen too. I’m so excited about how many people getting out there and helping others as part of their exercise. It’s a unique experience, and it makes so much sense.”

Alongside the visits to see isolated older people GoodGym Hackney run regular group runs, like flashmobs for good, these groups of runner tear around the borough helping community gardens, schools and parks.

“I liked the idea of running with other people and being given a task and at the beginning thinking “this seems difficult or impossible” at times and then after half an hour it’s done…. you think ‘oh my god’ but we did it…. We actually did it there’s a huge sense off achievement and doing something useful and pushing yourself.”

You can find out more about GoodGym Hackney on their website: goodgym.org/hackney

GoodGym Hackney meet at 6.45pm by London fields overground station and is open to new members whatever their fitness level.

You can read more of their stories over here