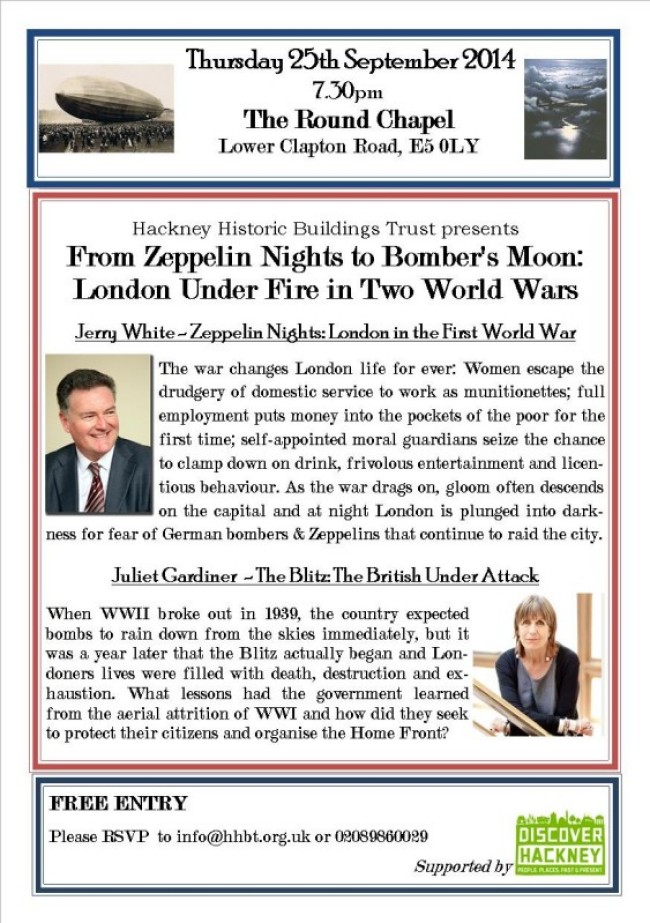 From Zeppelin Nights to Bomber’s Moon: London Under Fire in Two World Wars

Hosted by two local authors, Jerry & Juilet will be exploring concepts raised in their latest books.

Jerry White – Zeppelin Nights: London in the First World War
The war changes London life for ever: Women escape the drudgery of domestic service to work as munitionettes; full employment puts money into the pockets of the poor for the first time; self-appointed moral guardians seize the chance to clamp down on drink, frivolous entertainment and licentious behaviour. As the war drags on, gloom often descends on the capital and at night London is plunged into darkness for fear of German bombers & Zeppelins that continue to raid the city.

Juliet Gardiner – The Blitz: The British Under Attack
When WWII broke out in 1939, the country expected bombs to rain down from the skies immediately, but it was a year later that the Blitz actually began and Londoners lives were filled with death, destruction and exhaustion. What lessons had the government learned from the aerial attrition of WWI and how did they seek to protect their citizens and organise the Home Front?

Entrance is free but please RSVP to info@hhbt.org.uk or call 02089860029 and leave you name and number to book a place.