Dead Dolls Club return with cocktails and stews in Dalston

Co-founder, Kate Rosewarne, speaks to yeah! Hackney about how it all transpired…

The space looks amazing, what was it before you made it what it is today? 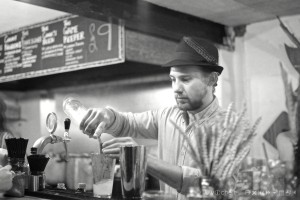 Cocktails at The Stew House are inspired by its baroque decor. Photo by Vichet Vong.

Before us it was a restaurant that had been closed for many years, and in was in a disgusting state, with dirt and grease like we (nor the industrial cleaners) had ever seen. All the work has been done by us, from knocking down walls to the fun part of decorating. I illustrated the walls by hand myself, it took two weeks and many marker pens to complete the drawings.

The decor is a nod to our Dalston surroundings. All the furniture has been made and designed by us, from the tables, to the bar. The hand lights that light up the bar are one of our designs from our design label Tinker & Tailor.

Where possible we have salvaged. From the brass splash backs above the sinks in the toilets, which we found in a skip, to the jars that are used as glasses, which have been collected from charity shops in the area.

Can you tell us a few details about the food and cocktail menus?

The food menu is designed by myself and Adam with the help of the chefs we’ve been working with since the start of The Stew House. We both love hearty English grub that is simple but tasty. As for the cocktails, we knew we wanted to do them and what we like to drink. But the recipes were concocted by our ninja bar staff. Both have backgrounds in cocktail bars and get totally excited about the tastes and flavours they mixed to create the final list. 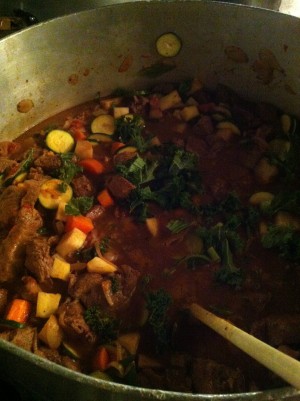 Stews include a venison, port and chocolate casserole or a spiced vegetable stew.

As for the names, Adam and I knew we didn’t want a traditional list of names. They needed to fit with the look and feel of the place, and the sense of Britishness that is such a part of the food as well. We struggled for a whole day trying to come up with names. Then I ( as an avid fan of many a costume drama) came up with ‘The Game Keeper’ for the beer cocktail and it flowed from there. The interior is like a grand house with an upstairs/downstairs feel, that’s why we have ‘Lord & Lady of the Manor’ as well as ‘The Duke & Duchess’. My favourite being the gin-based cocktail with a take on the saying ‘mother’s ruin’, which we instead named ‘The Cook’s Ruin’.

We will also have weekly specials and the guys will mix up anything you ask for if you don’t’ fancy what’s on the list.

For those that haven’t heard of you or been to any of your events – who are the Dead Dolls Club and what do you guys do? 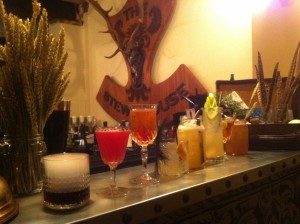 We, the Dead Dolls Club, run a creative studio which is a fantastic melting pot of photographers, designers, illustrators and fashion people. Not only is it our base and studio, it’s also our home. We’re not too sure exactly what we do as such, but we turn our hands to anything. We have our own design label, Tinker & Tailor, where we sell the things we make and also work to commission. We also run a pop-up called ‘The Stew House’ over winter and this summer we ran a series of “Summer Affairs’ at the London Fields Brewery. We also design sets for fashion labels and throw parties for people.

I wouldn’t immediately put stews and cocktails together as a natural pairing, but neither would I have put hotdogs and champagne (Bubbledogs) – why do you think the concept works?

Good food and good booze go hand in hand together. The cocktails also enable us to follow through on the design of the place with their garnishes and extras, such as stamps and sprigs of hay. It’s all in the little details for us.

What made you decide to chose a more permanent establishment to house The Stew House as opposed to your usual pop-up concept? 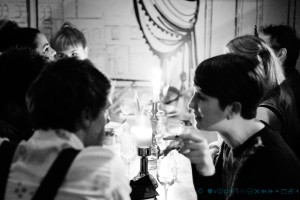 The space came up over the summer and we jumped at it. It’s allowed us to really go to town on the interior like never before, as we’ve had time to do the place up and totally transform it, rather than a day to put it all together and taking it down again two weeks later. We fancied a change to stay still for winter.

Do you have any plans beyond your six month lease?

That would be telling!! You’ll have to wait and see.

Apart from it being a wonderfully creative place, why Hackney?

I moved here when I started working for my friends who set up their own design studio in Hackney Wick seven years ago. Rent used to be cheap back then. I met Adam around that time. He was living up north so he moved down to be with me. The rest as they say is history.

All photos by Dead Dolls Club unless otherwise stated