“Dark and revelatory” THE WIRE ON NED COLLETTE NED COLLETTE has been carving his name deep into the musical landscape of Australia over the course of two albums, and “Networking in Purgatory”, the third, is the most sumptuous and accomplished yet. Originally from Melbourne, Collette has resided in Berlin for the last four years, and this album was recorded in both cities. Fittingly, the album cove... » 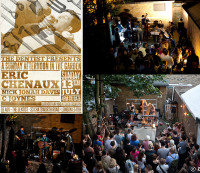 OPEN AIR CONCERT IN THE GARDEN SUNDAY 13TH JULY FROM 4PM (AFTER CHATSWORTH ROAD MARKET) “I’m in love with Eric Chenaux’s Guitar & Voice… Whether Chenaux is delivering compelling images atop gentle guitar solos or producing long, airy drones, the sound throughout is intoxicating.” – Stereophile Eric Chenaux is one of Toronto’s most prolific and respected musical iconocla... »

From the process music of Steve Reich to the Violin Duets of Bela Bartok, violinist and electronic m »

A Night of Russophone Rock and Roll, Vodka and Borscht

Another improbable free outdoor gig right on your Sunday Morning market doorstep, one for the drumm »

Come one, come all to a free gig by the Mak Murtic Ensemble, a 12 piece Balkan Brass Band that'll be »

I'm looking for a locksmith or anyone(ex-burglar?) who knows how to drill out a lock without a key. »