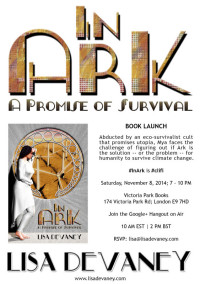 Please help me celebrate my book launch! In Ark: A Promise of Survival #InArk #clifi

Dear adored Hackney people, I’m thrilled to tell you that my book ‘In Ark: A Promise of Survival’ is soon launching on Saturday, November 8th! It is a dystopian cli-fi (climate change fiction) tale about a woman who gets abducted by an eco-survivalist cult in the year 2044. It is getting positive reviews from early readers. I’ve got a few limited spaces for you to attend th... »

Does anyone know about an illegal after-hours nightclub operating at 8 Mackintosh Lane, E9 6AE? On Friday – Saturday, August 22-23, this warehouse hosted an all-night event, and has done so several times over the summer. Over the Bank Holiday weekend’s disturbance, a hired bouncer was stationed outside the door, ushering in several dozen people in the late night, early morning hours. R... »