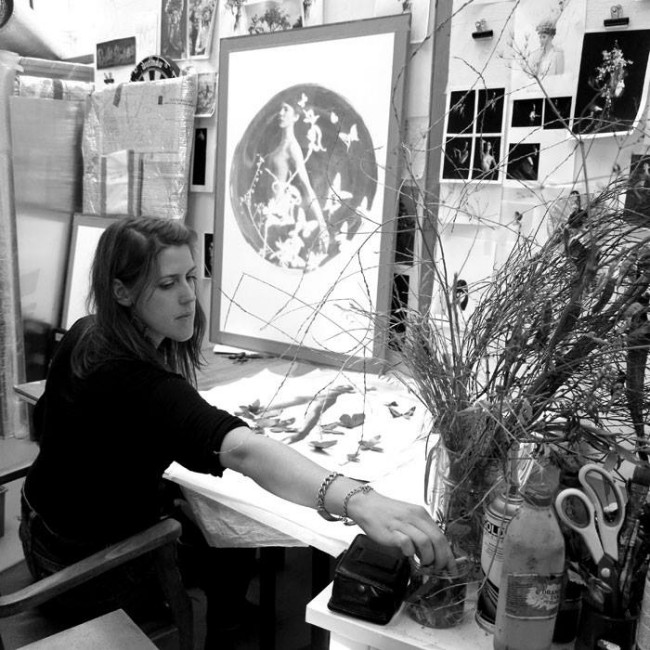 Rosie Emerson was born in Dorset in 1981. Since graduating in Fine Art from Kingston University In 2004. Rosie’s figures draw reference from archetype’s old and new, from Artemis to the modern day super model. Unrestrained in her technique she uses costume, intricate props, dramatic lighting, and playful collage to elevate her subjects to otherworldly, goddess like status. Staged without context or background, her subjects are objectified, adorned and manipulated, becoming an allegory of Emerson’s own fantasy.

‘My painting style is quite visceral and loose, by combining it with collage and photography it allows me to balance energy and precision, and create something, which despite hours of planning will still surprise me in its results.’

Her screen prints using natural materials, such as ash, sawdust and charcoal shift the focus of printmaking from precision and replication to creating unique, hand-finished prints with subtle texture.

In 2012, Will Ramsey; founder of The Affordable Art Fair deemed her work; ‘Beautiful, highly original and certainly collectable’ The Sunday Times Style Magazine.
Rosie has exhibited widely in the UK, as well, Europe, LA, Singapore, Hong Kong and Dallas. Rosie has also worked with Sony, Triumph Underwear, Redbull, P&O Cruises, Toms, and Jewelry designer Annoushka Ducas. Her unique collage style as led to her work being featured in the likes of Vogue, Harpers Bazaar, Another Magazine, The Financial Times Magazine, and The Sunday Times Style Magazine.

South East Analogue is a collective made up of three photography students about to enter their third and final year of studies at London College of Communication. All three shoot exclusively on film, sharing interests in analogue methods of processing.
Their work is concerned with ideas about personal landscape and home, which they consider as South East London.

Tom Addison’s most recent body of work was shot on 35/120mm from the end of March to the beginning of June 2014 and serves as a documentary of his life for that particular period of time.
Mark Damian’s work is concerned with the idea of his personal landscape. We live and work within our personal landscape, surrounded by objects, ideas, beliefs and values that help shape our personal identities.

Harriet MacFarlane is interested in the idea of home.
The work she has been making as part of South East Analogue explores the idea of London as her new home, after moving from the south of England to the city. Her photographs of her close personal landscape (the house she resides in) alongside photographs of vast empty spaces in London aim to articulate her feelings towards living in London – She says “It’s easy to be lonely but you can never truly be alone”.